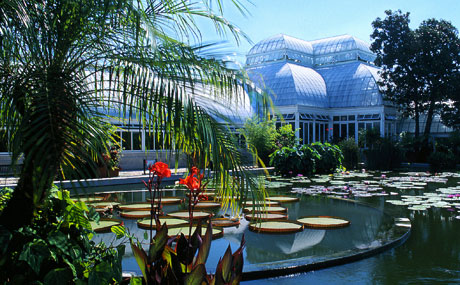 Most of the land that would become New York’s Botanical Garden was actually owned by the Lorillard Family. The City of New York eventually acquired that land, along with some of the surrounding areas, and decided to set up both a garden and a zoo there. The garden opened in 1891, during a time when industrial growth stifled natural life. The garden was like a fresh respite.

Today, the garden has more than 50 sections that include various plant species living together in harmony. A cascading waterfall gives way to manmade wetlands. Nearby, visitors will find a growth of 50-acre forest on a tract of land that has never been logged.

One of the more intriguing structures in the garden is the vintage-looking greenhouse, created by Lord & Burnham. It’s modeled after an 1890s crystal-palace greenhouse that Nathanial Lord Britton and his wife saw during a trip to the Royal Botanic Garden at Kew. The two thought that it would be marvelous to bring something so fresh and wonderful back to Manhattan.

The forest on that land is split by the Bronx River, which is the only fresh water body to run naturally through New York City. One can even find rapids there.

The grounds also house an extensive research laboratory, which primarily focuses on plant genomics. Among many questions, scientists hope to solve Darwins “abominable mystery”, which asks the question of when, where and why did flowering plants emerge? The lab was also given a grant of more than a half million dollars to try and create tree barcodes from plant DNA, which helps to identify different species definitively.

About the Author: Samuel Phineas Upham is an investor at a family office/ hedgefund, where he focuses on special situation illiquid investing. Before this position, Phin Upham was working at Morgan Stanley in the Media and Telecom group. You may contact Phin on his Samuel Phineas Upham website or Facebook.